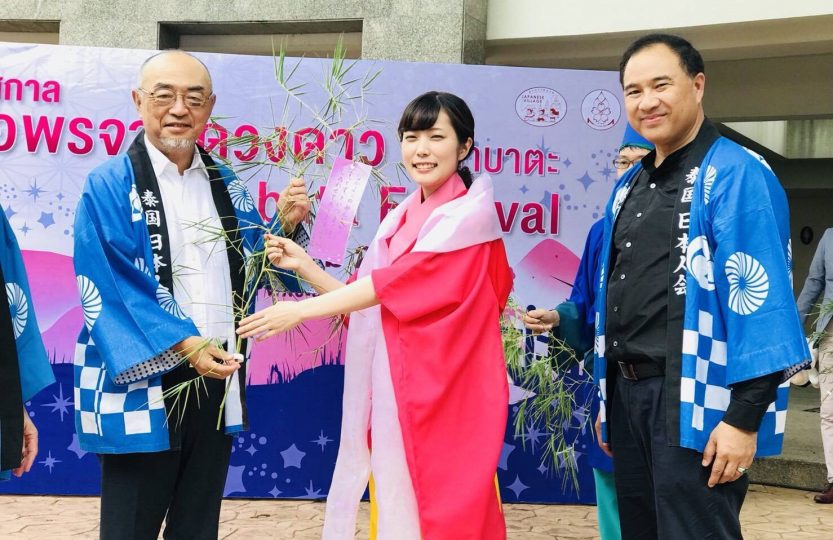 Tanabata (Japanese: たなばた or 七夕, meaning “Evening of the seventh”),

also known as the Star Festival, is a Japanese festival originating from the Chinese Qixi Festival. It celebrates the meeting of the deities Orihime and Hikoboshi (represented by the stars Vega and Altair respectively). According to legend, the Milky Way separates these lovers, and they are allowed to meet only once a year on the seventh day of the seventh lunar month of the lunisolar calendar. The date of Tanabata varies by region of the country, but the first festivities begin on 7 July of the Gregorian calendar. The celebration is held at various days between July and August 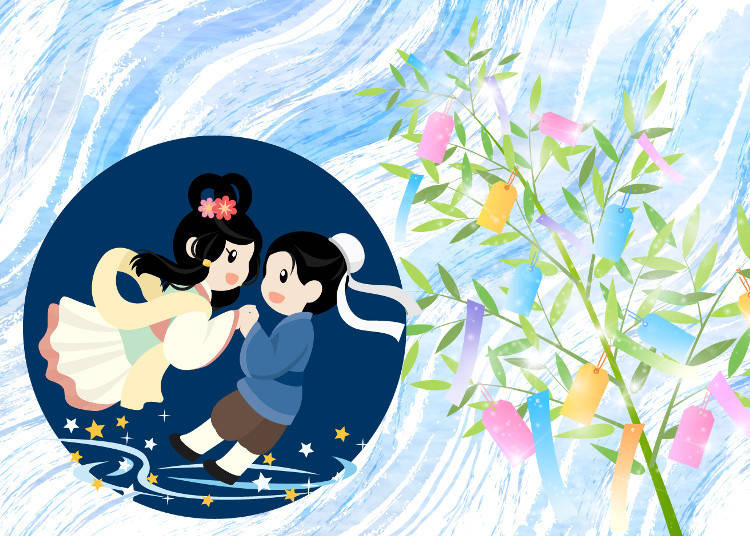 Orihime and Hikoboshi – The Story Behind Tanabata

Orihime (織姫, Weaving Princess), daughter of the Tentei (天帝, Sky King, or the universe itself), wove beautiful clothes by the bank of the Amanogawa (天の川, Milky Way, literally “heavenly river”). Her father loved the cloth that she wove and so she worked very hard every day to weave it. However, Orihime was sad that because of her hard work she could never meet and fall in love with anyone. Concerned about his daughter, Tentei arranged for her to meet Hikoboshi (彦星, Cowman/Cowherd Star, or literally Boy Star) (also referred to as Kengyū (牽牛)) who lived and worked on the other side of the Amanogawa. When the two met, they fell instantly in love with each other and married shortly thereafter. However, once married, Orihime would no longer weave cloth for Tentei and Hikoboshi allowed his cows to stray all over Heaven. In anger, Tentei separated the two lovers across the Amanogawa and forbade them to meet. Orihime became despondent at the loss of her husband and asked her father to let them meet again. Tentei was moved by his daughter’s tears and allowed the two to meet on the 7th day of the 7th month if she worked hard and finished her weaving. The first time they tried to meet, however, they found that they could not cross the river because there was no bridge. Orihime cried so much that a flock of magpies came and promised to make a bridge with their wings so that she could cross the river. It is said that if it rains on Tanabata, the magpies cannot come because of the rise of the river and the two lovers must wait until another year to meet. The rain of this day is called “The tear of Orihime and Hikoboshi”.